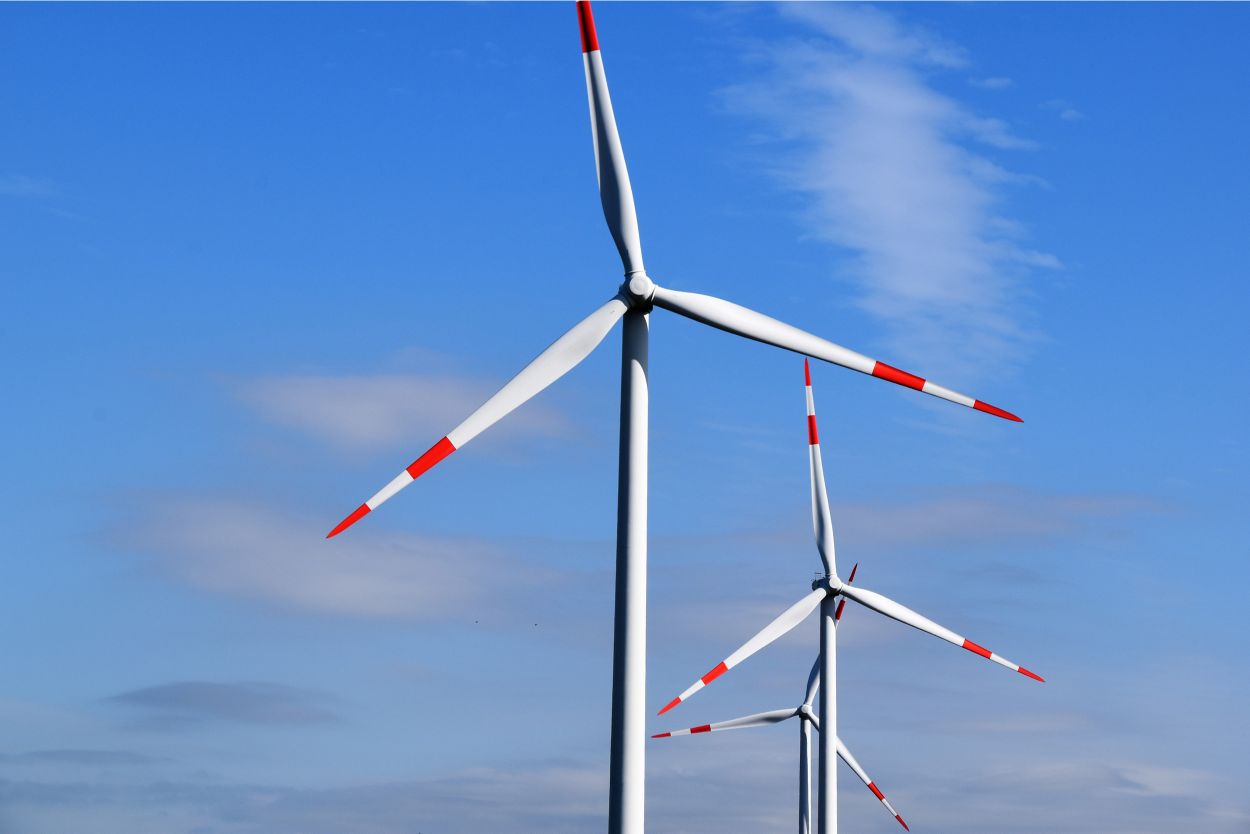 From great economic progress to building a better quality of life, energy is the driving force behind everything

From great economic progress to building a better quality of life, energy is the driving force behind everything. While living in the 21st century, individuals and societies have become significantly dependent on its potential, abundance, and convenience. It’s an undeniable fact that energy is propelling industries, sustaining societies, and boosting economies. Consider a power outage just for a few minutes, living without energy; it demonstrates how ineradicable its imprint is on your life, particularly on your daily activities. While it is making individuals’ lives easier and business goals achievable, on the other hand, it’s becoming more difficult for energy industries to keep up with the rising demand. That being said, the global economy is highly likely to consume even more energy in the future. In other words, higher global energy demand, dependence on fossil-based fuels for energy production and increasing population have lead to an inevitable energy crisis.

Europe on the Edge of Energy Crisis Believe it or not, the energy generated from fossils-fuels fulfills 80% of your current energy needs, which includes sources like coal, oil, and gas. However, the stated stats are anticipated to increase by half over the next couple of decades. This situation has been causing fear among many that we will run out of energy and it can lead to devastating consequences for the global economy. Speaking of the past two decades, oil reserves have increased by 40% and gas reserves by 70%; however, the expected rising demand indicates that the world will run out of renewable energy resources after 30 years.

Fossil-Fuels; the Devastating Energy Production Process for Earth However, the process for generating energy from fossil-fuels takes a huge toll on our ecosystems and landscapes. The unearthing and mining of huge areas to explore coal or oil deposits have drastically been destroying and leaching nutrients from lands, making them unfit for agriculture. This devastating process fragments and destroys the critical wildlife habitat. Furthermore, fossil fuels are non-renewable energy resources that release harmful air pollutants before burning. According to a report, around 12.6 million people in the US are exposed to toxic air pollution daily from oil and gas wells. These air pollutants include benzene and formaldehyde, which can cause leukemia and other dreadful diseases, including cancer. Besides, CO2 emissions in the atmosphere and burning of fossil fuels for energy are two of the major causes of rising temperatures. With the advancement in various economies, scientists have realized the disastrous consequences of burning fossil fuels for energy and come up with a new approach to keep up with the energy demand; they have developed technology that could derive energy from renewable sources. A product of natural resources like solar, wind, tidal, geothermal, biomass, and hydro, green energy has proven to cause no harm to our ecosystems. In addition, the renewable energy industry in Europe is also fostering technological innovations and development across the continent.

Investing in the Green Energy Industry The global green energy industry amassed a total of $476.3 billion in 2014 and future projections by a BBC report indicate that the industry will grow at a 10.3% annual rate by 2019. Now, renewable energy is becoming more economically viable, luring consumers to shift to these technologies along with growing concerns over fossil-fuel energy production. Speaking of investors, they are reconsidering the market for making investments. If you talk about the future of the renewable energy industry, the future seems ‘green’; a report reveals that this particular sector will receive around $5.1 trillion in investment by 2030. Moreover, investing in the renewable energy industry, particularly in wind parks, is certainly a profitable idea for investors.

The Bottom Line Today, Europe is the center of the renewable energy revolution, and has made a great impact on the fossil-fuel energy production industry. For safer, cleaner, and more secure supply of energy needs, European citizens and businesses are shifting their focus toward green energy. Keeping the aforementioned details in view, the future of green energy seems economically viable. 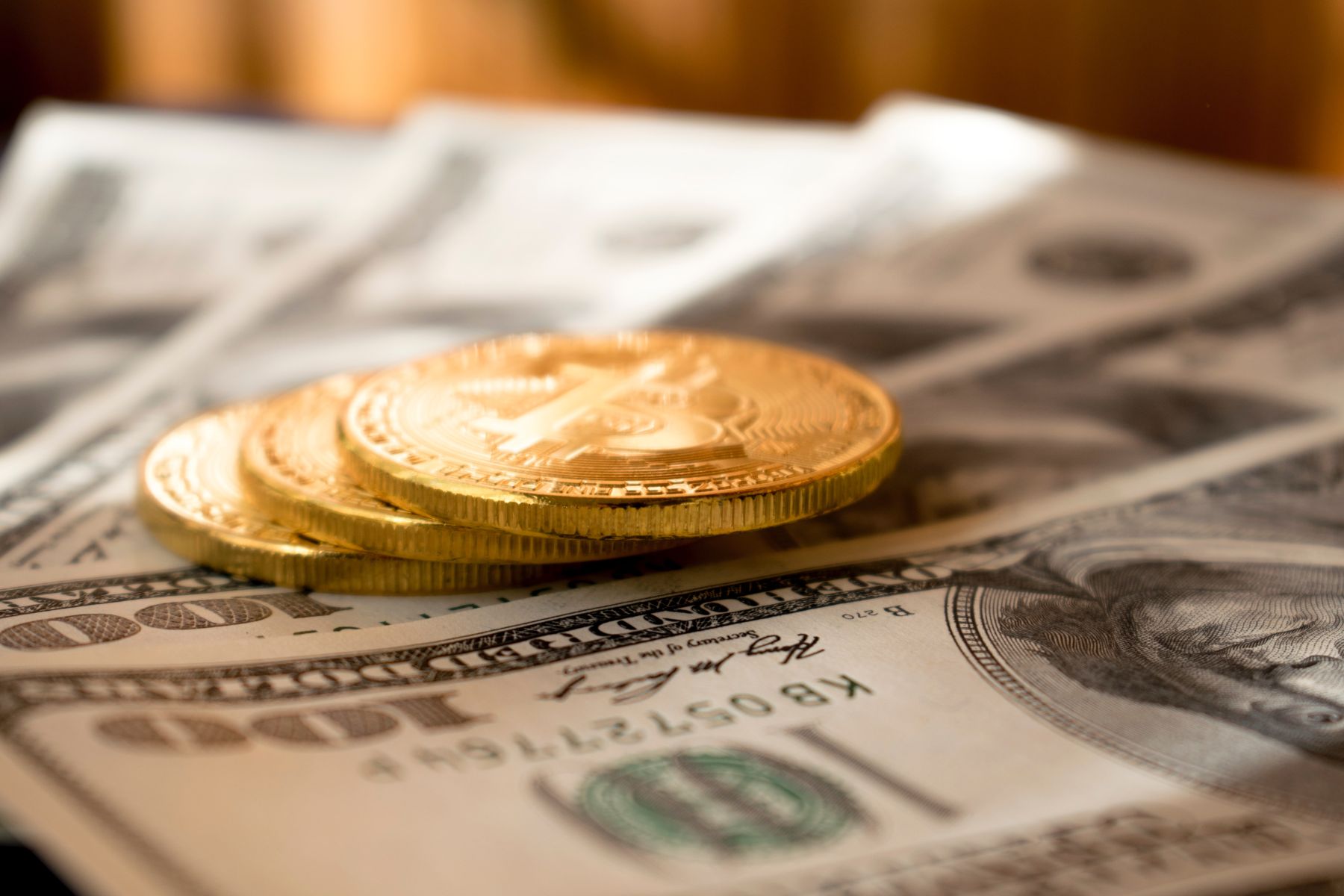 The workflow for distribution of dividends will look similar to the graphic which we already added to the prospectus.

With this setup, we are very confident that we have all professional stakeholders onboarded until end of April so that the distribution of first dividends can happen in May. This is also aligned with our timeline which we have in our prospectus.

The current dividends are accumulated within the business account of API Mobile SIA you can always find out more about API Mobile here. Those dividends will then be distributed towards the holding Enercom AG (once the sale of API Mobile to Enercom AG is successfully done) with the successfully raise of the Enercom Token we will also use part of the use of proceeds to purchase Rapsoil SIA to make sure that further dividends for our token holders will be sustainable beside the API Mobile SIA dividends which have a great potential to increase due to highly experienced management and team players within the new potential subsidiary API Mobile SIA. We will be able to further work on the project of Rapsoil SIA to make sure all the groundwork will be finalised to achieve a way for future partners to easily access the project and start creating value to buy and build the wind turbines so that revenue is generated with producing energy and sell them to the grid with a potential power purchase agreement with Nordpool Group or any other potential buyer. If you have any questions about our business model, or how we plan certain things beside some details of the prospectus feel free to reach out to us so we can make sure you fully understand what we want to achieve in the future and do our piece for a better tomorrow for our children and grandchildren.

[email protected]
Or reach out via phone 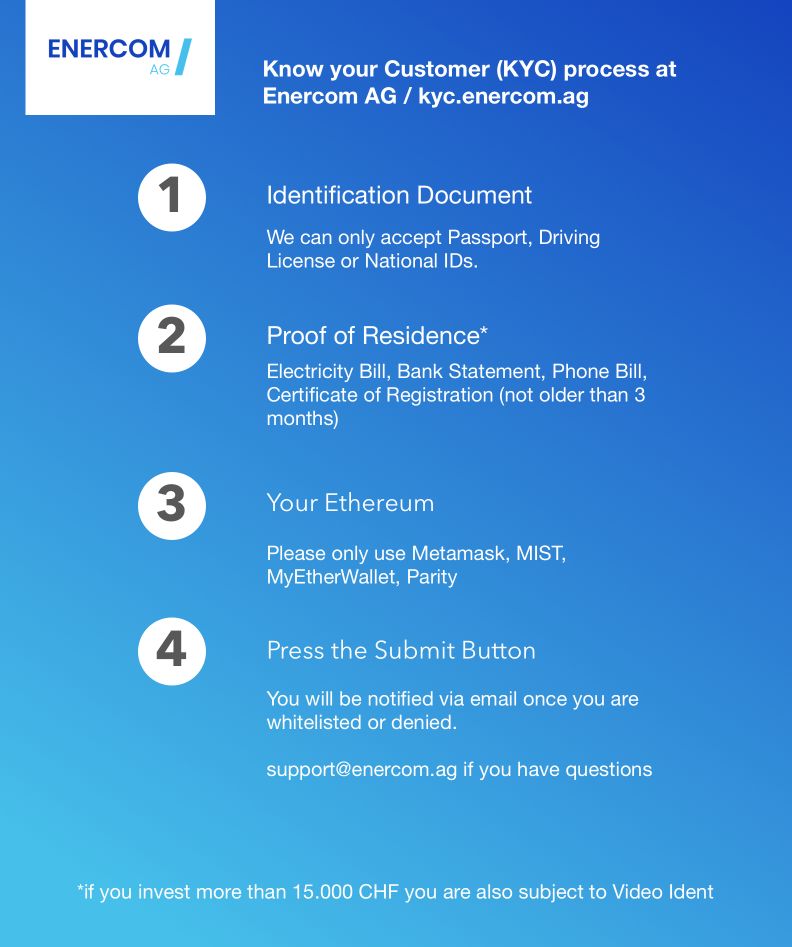 Compliance is getting more and more important over the last several years for blockchain-related startups. At the core are certain checks with industry-standard tools to make sure that the subscribed investors is not related to politically exposed persons, or might even be wanted or related to fraud cases worldwide. So usually most of the KYC checks on Investors are rather straightforward but the compliance partner needs to make sure that latest checks are a state of the art to make sure that none of the investors are related to money laundering or terrorism finance. This is achieved with several layers and we are very keen to follow them with industry experts from consulting firms over to one of the leading blockchain bank in Liechtenstein Bank Frick.

We are onboarding individual persons but also corporates slightly differently with regards to fields which we ask to fill out so that our compliance partner can do their job faster, better and with fewer errors. 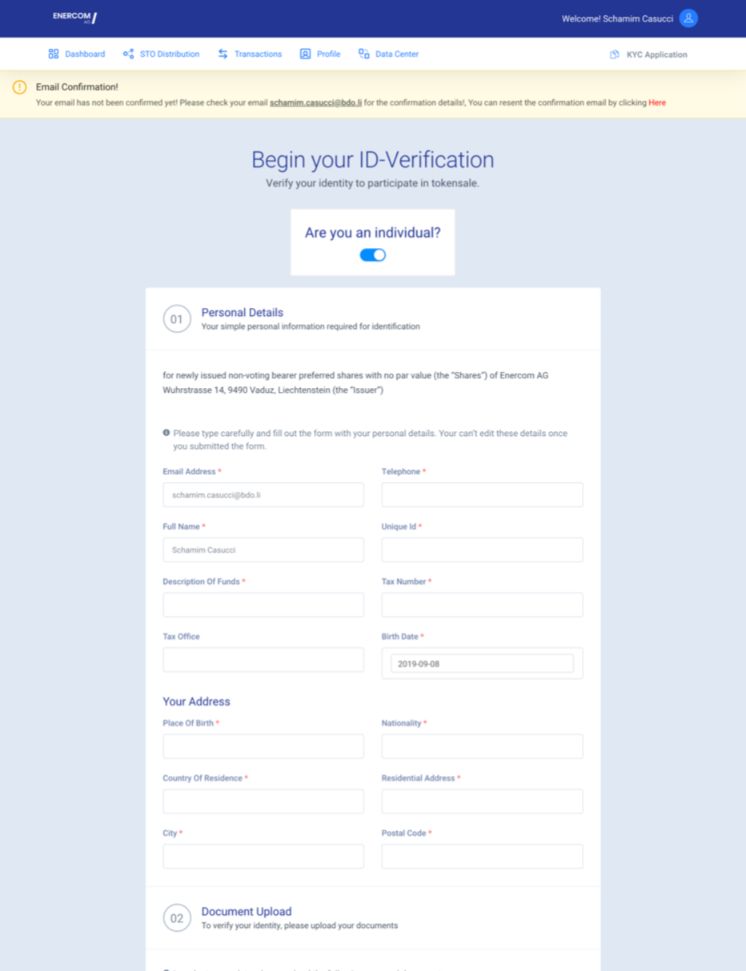 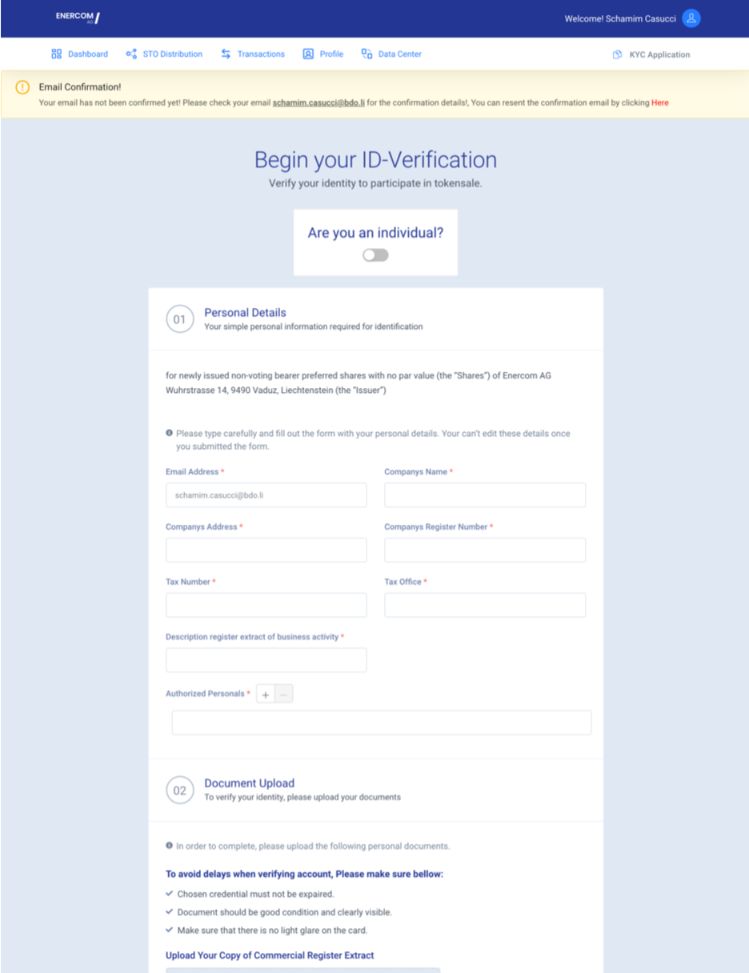 Different level of KYC details
Furthermore, we have certain levels which are required by the Bank compliance to make sure to follow – this is aligned with our compliance Partner BDO Liechtenstein.

Source of funds
Please make sure that if you fill the source of funds that you are as detailed as possible. You can access the list with this link.

Do you have any questions with regards to KYC as potential Investor? Reach out to us via email, telegram or phone we are there to help.

The information on the ENERCOM website is intended exclusively for qualified investors within the meaning of Regulation (EU) 2017/1129.

The website is also not directed at any person or entity whose domicile, residence, principal place of business, incorporation, origin is subject to any foreign jurisdiction where the dissemination or use of such information and documents would be contrary to applicable law or regulation and would subject ENERCOM to additional registration requirements.

Qualified investors means persons or entities that are listed in points (1) to (4) of Section I of Annex II to Directive 2014/65/EU, and persons or entities who are, on request, treated as professional clients in accordance with Section II of that Annex, or recognised as eligible counterparties in accordance with Article 30 of Directive 2014/65/ EU unless they have entered into an agreement to be treated as non-professional clients in accordance with the fourth paragraph of Section I of that Annex. For the purposes of applying the first sentence of this point, investment firms and credit institutions shall, upon request from the issuer, communicate the classification of their clients to the issuer subject to compliance with the relevant laws on data protection. The relevant Directive 2014/65/EU can be accessed here. In brief, professional clients are: